After Han van Meegeren became famous in 1945, the price of his own works rose with his fame. People wanted genuine Meegeren paintings, especially in the United States where an interest had arisen in the work of the man “who swindled Goering”. It became lucrative to forge a Meegeren painting, so that many wrongly attributed and dubious pictures reached the market.
A great difficulty arises here as both Meegeren fakes and originals have been made with modern paint, modern canvases and using modern styles. Distinguishing between genuine and forged Meegeren paintings is extremely difficult and often inconclusive.
Moreover Van Meegeren has made it difficult for us as he has worked in so many styles: classic; impressionistic; “sweet”; jocularly; surrealistic; Chinese-like; etcetera.
An assessment of authenticity is always risky but in the case of Meegeren pictures it is even more so since his son Jacques is known to have faked his father’s work as well. He knew the trade from his father and worked in the same style.

Studying the Meegeren signatures may help. Throughout his life he signed with the same signature H. van Meegeren; only in his youth and in his student days did he occasionally sign with H.A. or h.A. van Meegeren. Either type of signature is, however, easy to fake.
If a signature is missing this might point to a forgery as he almost always signed his works, but this is not conclusive.
On the other hand, a well-made signature is no proof for authenticity either as his signature can easily be imitated. Only in cases where a poorly made signature is apparent, forgery can be taken as a fact.
In order to assist the reader in distinguishing between sound and fake signatures a collection of Meegeren signatures is shown here. Most of them are genuine. The second one in the left-hand column is suspect because of the slanting letters and the use of a v. instead of the word van. The fifth signature in the left-hand column is by Han’s son Jacques, with slanting, sharper letters. The seventh one in the centre column comes from the official Meegeren identity card from 1941. The bottom ones in the centre and right-hand columns are imitations. 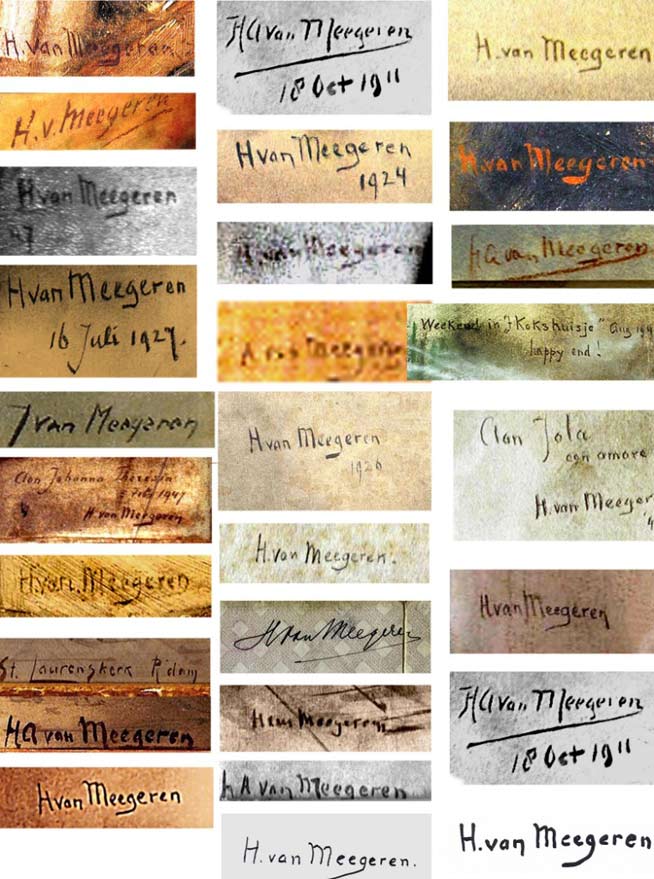 When Van Meegeren became famous after the disclosure of his fakes in 1945 his own work came in demand, prices rose fast and it became worth-while to forge Van Meegeren.
The forger was forged… the deceiver cheated.

In the following gallery FALSE and GENUINE pictures of Van Meegeren will be shown, and also a few DOUBTFUL ones. 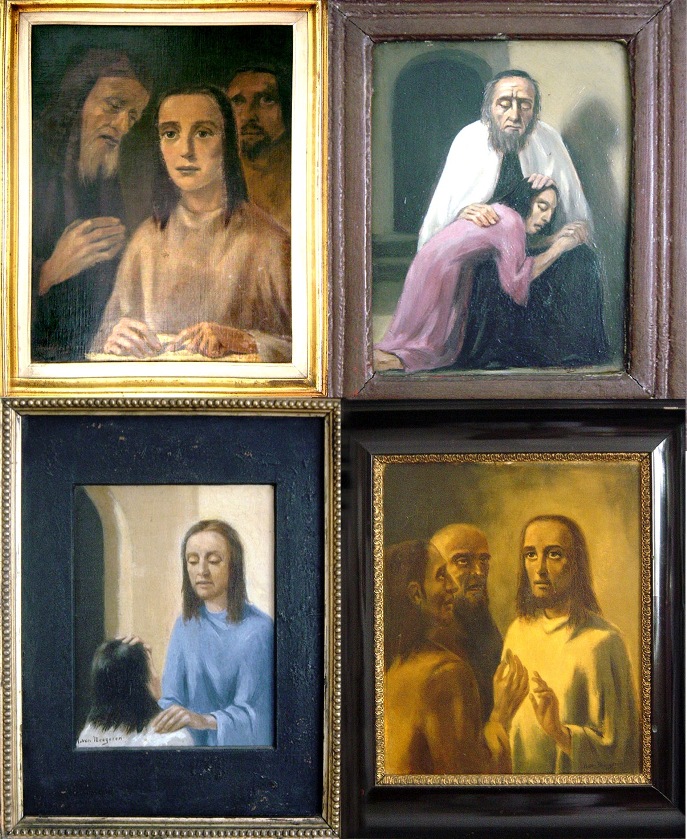 S T A T I S T I C S
In recent years more than a hundred pictures signed as a Van Meegeren came to our knowledge. They were either offered for sale, owned by private collectors or submitted to this website.
Our experience regarding their authenticity can roughly be summarized as follows:

This result is not surprising. Even in his own time false Meegerens appeared on the market, a fact which Van Meegeren could well appreciate!
And in 1948, after his death, his widow warned the public about faked Van Meegeren paintings in an advertisement in a well-known daily paper:
"In order to protect the public against the purchase of works that have been falsely signed H. v. Meegeren, I hereby make myself available to give advice following an appointment by letter or by telephone: the widow J. van Meegeren-Oerlemans, Keizersgracht 321."

Han van Meegeren made hundreds of pictures under his own name. About 450 works were registered in a study of 1979, more than 100 have come to light since then. It may safely be assumed that Van Meegeren created at least 800 pictures in his life, including advertisements, posters, book-illustrations, jocular sketches, etc.

Almost all these works have been signed “H. van Meegeren”, see the collection of signatures at the top of this page, unsigned works are rare.
However, a small number of works – seven up till now – were signed “H v M” (with or without dots); five of these signatures are shown above. They usually represent work with an anecdotic touch and encompass the following works: 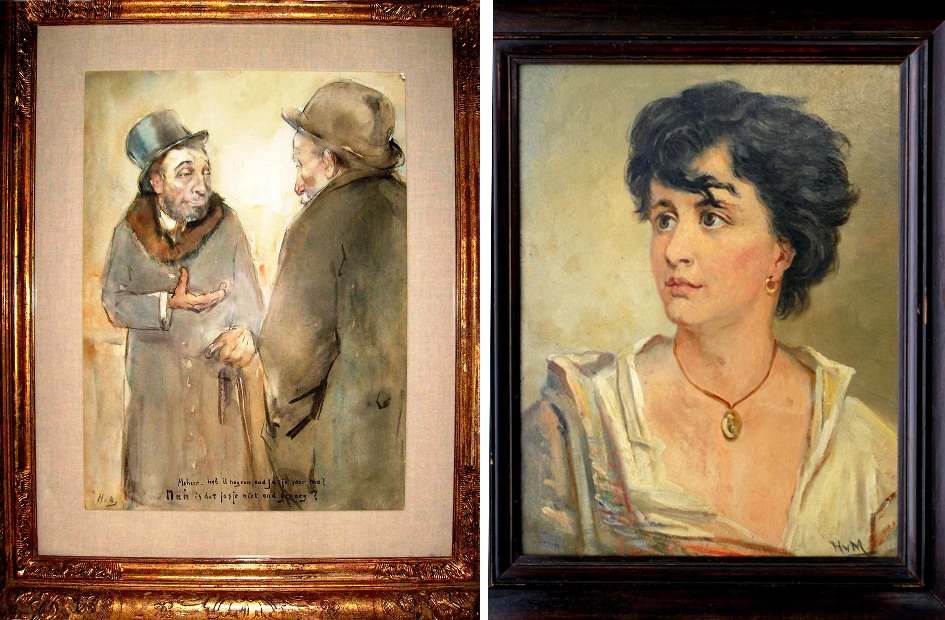 The aquarel "Ragman" and the painting "Jeune Napolitaine" are two examples of pictures signed HvM, from his The Hague Period ca 1920 - 1932.

When in custody Van Meegeren made sketches to indicate where in X-ray photographs underpaintings would show up.
At left a sketch of the "Emmaus" with an arrow towards a little head that would show up (and actually did).
At the right side a sketch of the old canvass under his "Last Supper I".
Both show a hasty scribbled HvM. 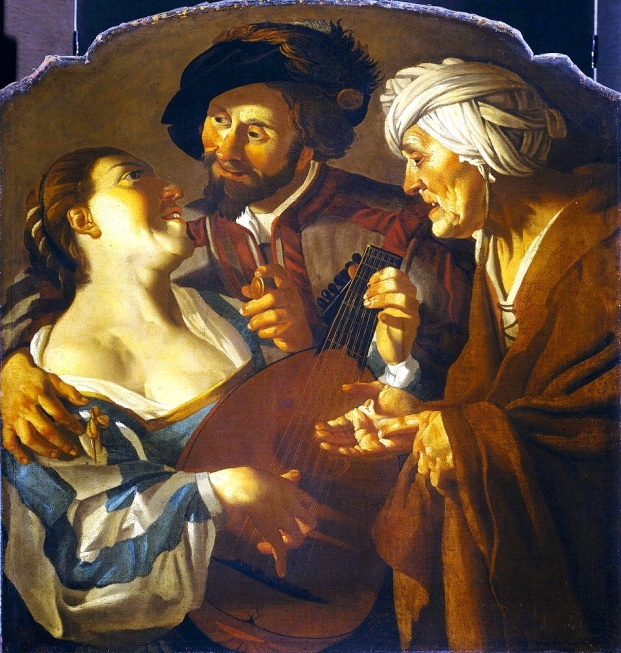 THE PROCURESS, FAKE OR COPY?

The Rijksmuseum in cooperation with the Courtauld Institute of Art has identified a work by Van Meegeren that cannot said to be a fake (as the original is too well known) nor a copy (because Van Meegeren suggested that his work was the original).
Since 1960 the Courtaulds Institute in London owns a Procuress after Dirck van Baburen (1595 to 1624) that was thought to be a modern work by Han van Meegeren (1889 – 1947). But nobody knew for sure. When asked for his opinion Van Meegeren connoisseur prof. Kreuger stated that there was only one way to make sure, that was to test the painting for phenol formaldehyde, the ingredient that Van Meegeren (and nobody else) used for artificially aging his 17th-century pastiches.
Initiated by a BBC documentary (broadcast 3 July 2011) the Courtauld in London and the Rijksmuseum in Amsterdam cooperated: a particle from the paint of the Courtauld Procuress was tested by the scientific department of the Rijksmuseum. It was clearly shown that the paint contained phenol formaldehyde which was a firm proof that the painting in question was by Van Meegeren, which he created somewhere around 1938/39.

A remarkable outcome, the more because Van Meegeren stated in 1945 when he confessed his other fakes:
"On some of the paintings of Johannes Vermeer a painting by Baburen, The Procuress, is found. In about 1938 my former wife bought such a painting for, I suppose, 600 Francs from an antique dealer in an off-street of the Avenue Victoire in Nice. As a similar painting hangs in the Rijksmuseum in Amsterdam, I cannot say which of these two paintings is genuine." (text found by the Van Meegeren-historian prof. A. H. Huussen, translation by prof F.H. Kreuger).
Was this a lie or did his wife Jo indeed buy a 17th-century painting in Nic in 1938 from which the original paint was removed and on which a copy of the procuress was painted by Van Meegeren? As so often in his life, Van Meegeren leaves us with a mystery: did he intent to bring this painting on the market as a genuine 17th-century Baburen? At the same time time suggesting that the Rijksmuseum version was nothing more than a copy, either contemporary or from a later time?
Confusion… that's what Van Meegeren liked to create, certainly when he could irritate members of the art establishment (such as the directors of the Rijksmuseum) with whom he had a life-long feud.

(There exists a third version of this Procuress owned by the Museum of Fine Arts in Boston which closely resembles the two other ones. That one, however, was purchased by the museum as late as 1950; Van Meegeren could not have known it.) 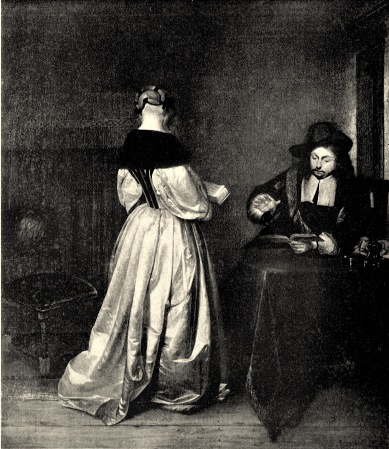 Van Meegeren owned this painting by Gerard Terborch, Dutch Master and contemporary of Johannes Vermeer. It was a "Singing-lesson" that we know from a black-and-white copy in a book from 1943 on the 17th century painter Gerard Terborch.
We may well compare this painting with two other works of Terborch (see below):
"De vaderlijke vermaning" (The parental admonition) in the Rijksmuseum in Amsterdam and
"Muziek-onderricht" (Musical instruction) in the National Gallery in London. 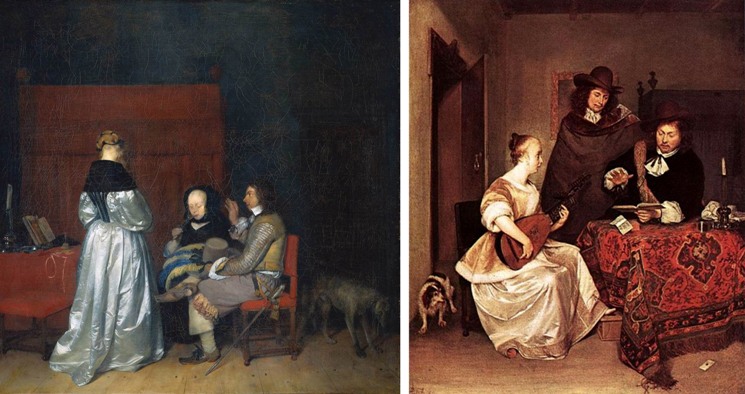 "The Parental admonition (Amsterdam) at the left and "Musical Instruction" (London) at the right.
The question is now: was this painting owned by Van Meegeren a genuine Terborch or was it a clever fake made by Van Meegeren himself?

On the one hand Terborch is known to have made many variants of his own work and this one could easily have been one of these variants. In addition, Van Meegeren had more than sufficient money to buy an authentic Terborch (after having sold so many Vermeer and De Hoogh counterfeits).

On the other hand Van Meegeren loved to deceive the art-world, as we have seen so many times and as he could have done here as well. This painting could thus be a fake-Terborch. We simply donot know.

The where-abouts of this "Singing lesson" by Terborch is not known. We only have the black-and-white reproduction shown above - and a tiny coloured picture because Van Meegeren painted a copy of it in the background of a portrait he made in 1944. 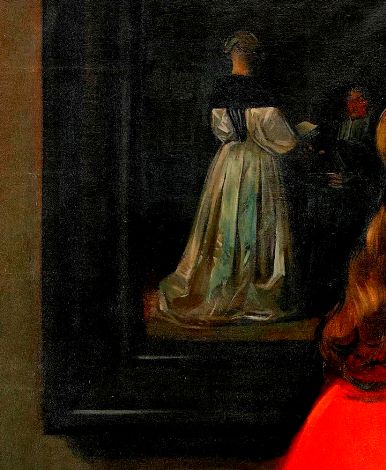 A picture of the "Singing lesson" has been painted by Van Meegeren in the background of one of his portraits, done in 1944. 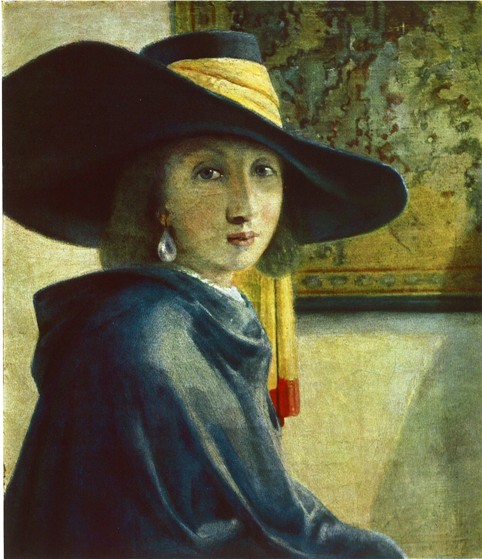 Lady with a Blue Hat.

This forgery was sold in 1937 by Van Meegeren to the Thyssen collection. In 1958 it was recognized to be a fake and removed from the museum.

But surprise, surprise. A hand-painted copy of this painting is offered these days by a Chinese painting factory as a "Young Girl in Antique Costume". And by whom? Yes, by Johannes Vermeer!
This Van Meegeren forgery has gone a full circle: a true Vermeer in 1937, a fake in 1958, and an authentic Vermeer again in our time... Wonders will never cease.