Anybody who wants to participate in a discussion about Han van Meegeren, or who wants to pose a question is welcome to do so.
Also new facts or new photographs of Meegeren paintings are welcome. Please use are contact form.

We have seen a similar scene before. Van Meegeren often made more than one version of a picture he loved.

The pictures published on this website are regularly replaced by new discoveries.
Most of these pictures can also be found in the E-book "Van Meegeren Revisited", see on the website-page "Bibliography". 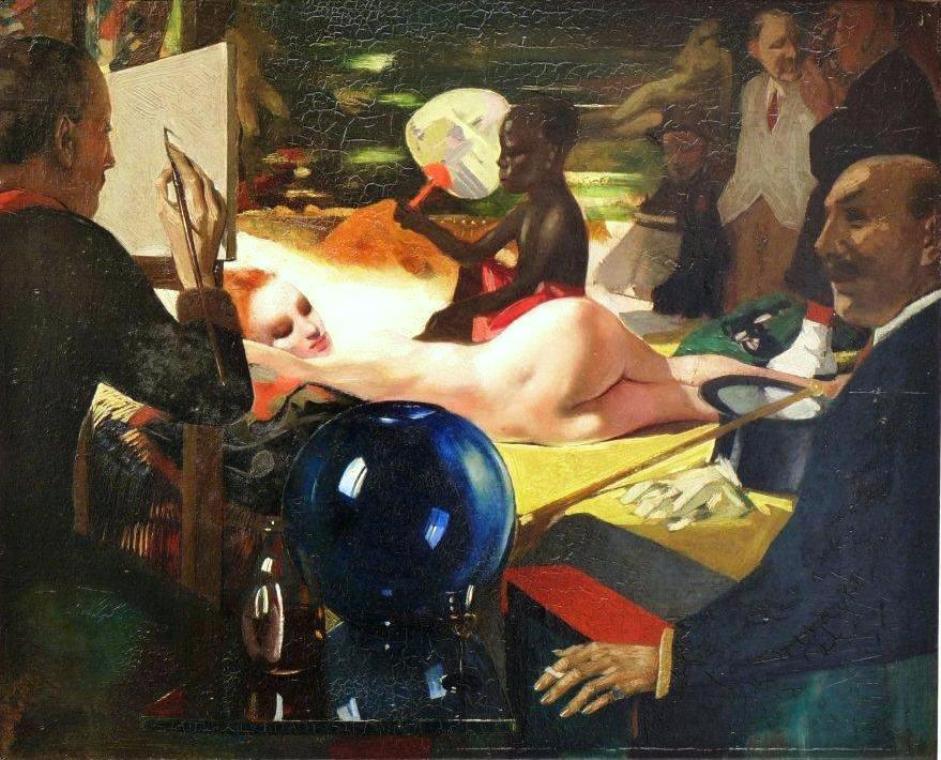 We received a question from the auction house ARTCURIAL in Paris about a painting that hereby will be called STUDIO 1923. They wanted to know whether this painting could have been created by Han van Meegeren.

As soon as we saw this painting we were struck by the resemblance with the drawing ZELFPORTRAIT 1923 that Van Meegeren published in his album "Teekeningen 1". 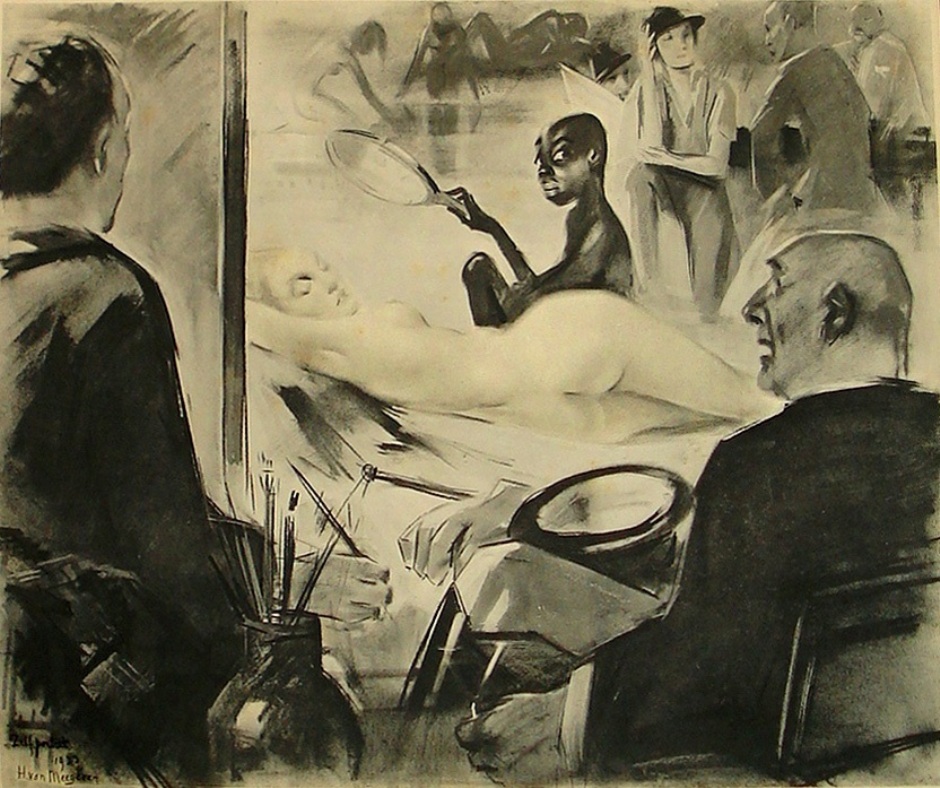 The differences between the drawing and the painting are many, but one particular difference is paramount. That's the small black boy in the DRAWING that in our opinion is the quintessence of Van Meegeren's picture: he pokes fun with the serious atmosphere of a painter at work with. The boy looks unashamed to the spectator and shows an impish expression.
In the PAINTING, however, nothing is left of this provoking atmosphere, the black boy is not involved anymore and he looks neutral.
It followed from this and the other observations that the PAINTING had not been made by Van Meegeren.

A second Version, a Fake, or a Paraphrase?

- It was clear for us that the PAINTING had not been created by Van Meegeren (that is, not as a second version of his Zelfportret 1923).
- But it is no fake either. The differences in style and the absence of a signature rule that out.
- This leaves the possibility that the painting is an autonomous work made by a first-rate but unknown artist. That is, as a Paraphrase or Pastiche of Van Meegeren's drawing. It is a most interesting piece of art and it certainly has – to a connoisseur of Van Meegeren's work – a substantial emotional value. 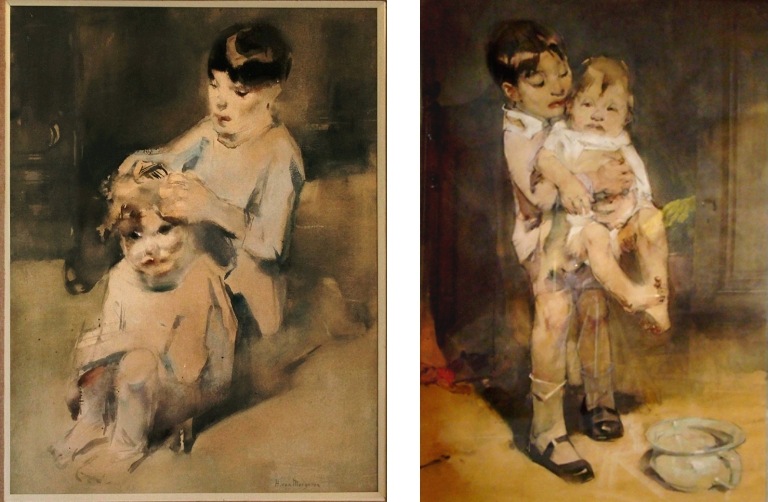 Recently a watercolour was found that depicted Van Meegerens children: "A brother combs the hair of his little sister".
The picture resembles the work we know already from his 1917-exhibition: "Een zwaar vrachtje (A heavy load)".
Both works have large dimensions as usual with Van Meegeren.

A most peculiar drawing by Van Meegeren, 150x300 cm! Not mirrored: it shows a shops window from the inside... 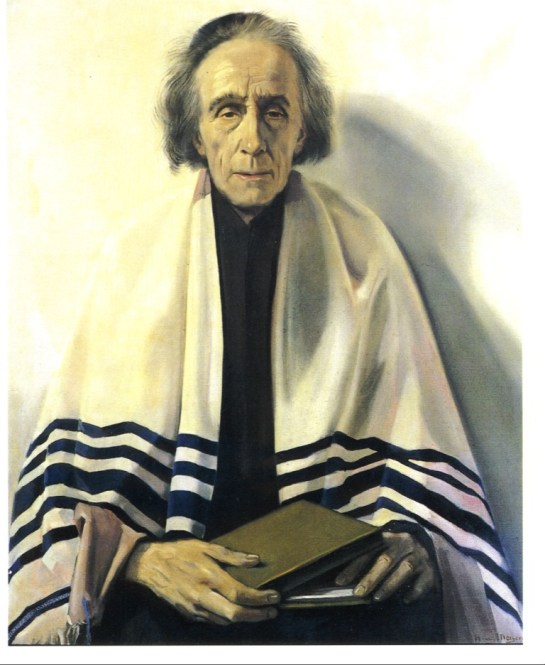 This painting of Jopie Breemer as a praying Jew was made in about 1940/1941. One could wonder why Van Meegeren and Jopie did so at that time. Holland was occupied by the Nazis and it was highly dangerous to create anything Jewish, both for the artist and his model.
Moreover the picture seems not to be complete: Jopie does not wear a yarmulke (keppeltje) and the book in his hands looks like any book, not as a prayer book. Other details do not agree either. The picture looks more like an off-hand portrait than as a serious work depicting a praying Jew. It is one of the many mysteries Van Meegeren has left to us…
See also section Bibliography of this website.

CALL FOR A LOST PAINTING

When the Van Meegeren estate was auctioned in 1950 in Amsterdam one of the items to be sold was a huge pastel called Carriere. It represents a seemingly drunk man; tiny female figures are climbing against his legs and his body.
No proper image of this work has survived, but we know how it looked like as it appeared on some of the photographs of the auction. Enlarged views of these photographs are shown here. Photo (1) gives a fair but faint impression of the overall picture; Photo (2) shows a smaller part, but with more detail (have a good look); Picture (3) shows the same corpulent gentleman in an other Van Meegeren picture

Does any visitor of this site recognize this huge picture? The dimensions are 197 x 115 cm, the technique is pastel.
If so, could you send us a full-colour photograph? 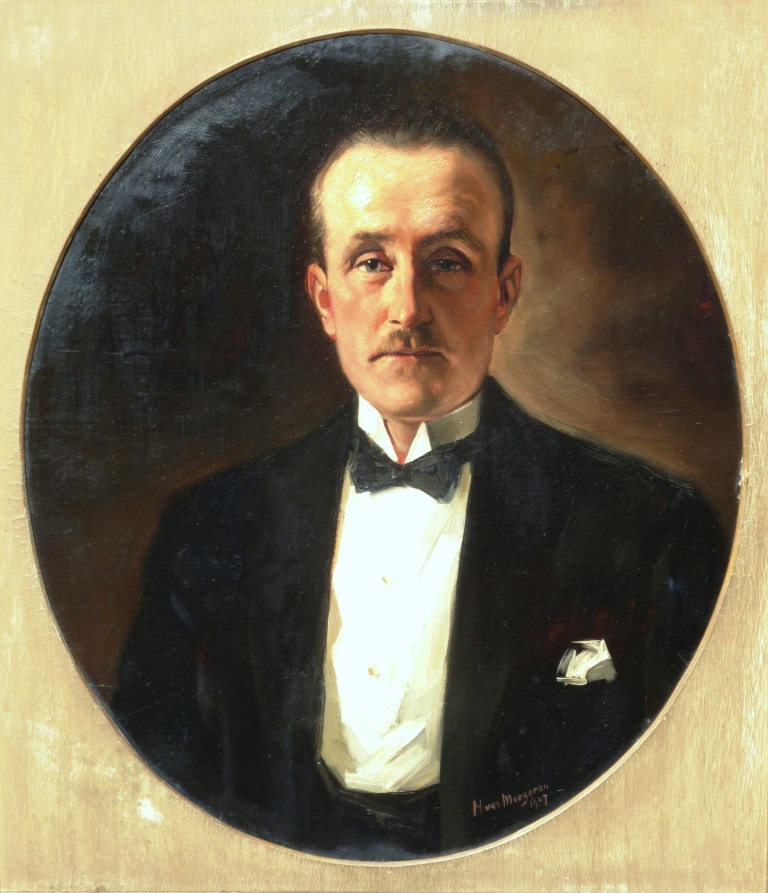 During his study at the Technical University in Delft, Han van Meegeren lived for five years in Choorstraat (Choir Street). The freemasons lodge Silentium http://www.logesilentium.nl was situated in that same Choir street, near his home. Every Tuesday-night he saw respectable citizens in black clothes who carried black satchels, on their way to the lodge building http://www.delft-vrijmetselarij.nl . But he never painted freemasons or made portraits of men in freemasons attire. However one of his paintings reminds us of such a person, a man in full evening dress (Oeuvre number K81.2). Is he a freemason pictured before donning his regalia?